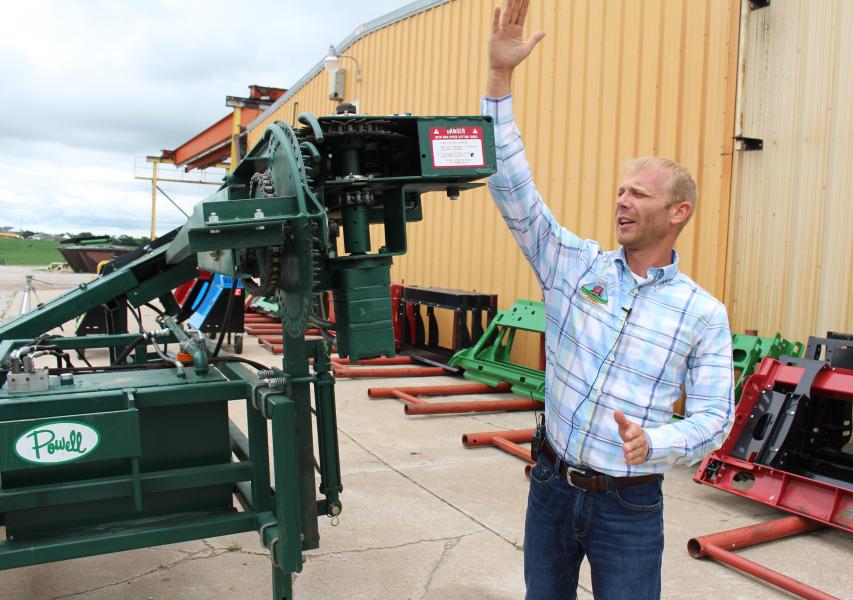 It’s a cloudy, muggy, buggy morning at the University of Nebraska’s Eastern Nebraska Research and Extension Center, about 30 miles north of Lincoln. Agronomy Professor Ismail Dweikat stands in the middle of a small field of green hemp plants, their leaves spreading out like Christmas tree branches, and describes his research. “Our goal here, our objective, is to identify the best conditions to produce the maximum or optimum yield in hemp. So we have three different nitrogen rates, we have three different plant density, and we have two different environmental applications — one is dryland and one is irrigated,” Dweikat says.

This plot — one acre — is the extent of legal hemp production in Nebraska this year. Hemp comes from the same plant as marijuana, and the federal government treats it as a controlled substance. But varieties with low levels of THC, the psychoactive ingredient in marijuana, can be used for everything from textiles to medicine and food.

States can allow growing hemp for research – either by licensing farmers to grow it, or having academic institutions do it, as Nebraska’s doing. To get seed certified as having low THC, Dweikat imported it from Canada. Standing in the field he planted, Dweikat says differences in the hours of daylight mean the plants here are flowering and producing seeds early, instead of growing tall. “It’s already up to – not to my waist. Which is not good at all because hemp’s supposed to grow up to 8 to 9 feet tall,” Dweikat say. “The bigger the plant, the more seed it’s going to have. And the more seed, the more tonnage per acre. But when the plant is short and starts producing seed, you are going to have about 1/3 of the tonnage, compared to the usual height.”

Dweikat says researchers could try seed from other countries. “Or, there are lots of wild hemp grown in Nebraska. We could use what we have here to develop our own varieties that are already adapted to the Nebraska environment.”

A few miles down the road, on a plot of private land, he points to a stand of wild hemp, or ditch weed, that already towers over his head. He’s saving seeds from it, but so far, not growing them.

Dweikat says the number of acres where hemp is grown varies from state to state. “There are huge differences because in Colorado and Kentucky, somehow the state has allowed the farmers to grow hemp. And so that you have 3,000 acres of hemp growing in Kentucky and Colorado. We had one here,” he says. “Farmers here are really hoping that the state will allow them to grow hemp, just to have additional income because they are losing money on corn and growing wheat.”

A report last year by the Congressional Research Service noted industry estimates of $600 million in U.S. sales of hemp products last year. The report said some studies predict farmers could benefit from allowing them to grow hemp. But it added gains in profits and employment were impossible to predict.

In the last Nebraska legislative session, one bill would have directed the Nebraska Department of Agriculture to license and regulate hemp growers. Farm groups supported the proposal; the Department opposed it as too costly to administer, and the bill died in committee.

Despite the lack of hemp production, other parts of the industry are growing in Nebraska. Outside Giltner, 75 miles west of Lincoln, Andrew Bish shows off some hemp processing equipment his company manufactures: a header for a combine, a machine to handle individual plants grown for CBD oil, and a “Budd EZ” device to separate buds from stalks. Bish says the market for his equipment is looking good. “It’s huge. We anticipate this year to see double the acres that were grown last year, at minimum, which means 50,000 acres of hemp” in the United States, he predicts.

But Bish says varying state laws are still holding the hemp market back. He hopes Congress will simply legalize growing hemp in the Farm Bill.

As far as changing state law in Nebraska, when Gov. Pete Ricketts was asked his view recently, he said he would defer to agricultural experts. But the governor raised a concern. “I do know when I talk to law enforcement that when you have that agricultural hemp, that it does make it more difficult to find the illegal marijuana that’s being grown,” Ricketts said.

Dweikat says preventing people who grow hemp from also growing marijuana could be done the way Canada has done it. “It’s very easy to control if we have the human resources and tell the farmer ‘Grow hemp. And well come do an inspection and if we find one marijuana plant, you will pay a price for it – you will pay a fine, well destroy your crop.’ Then people are going to think twice before they do that,” he said.

Whether that is an option Nebraska considers, and where federal law ends up, could have big effects on the future of hemp in Nebraska.