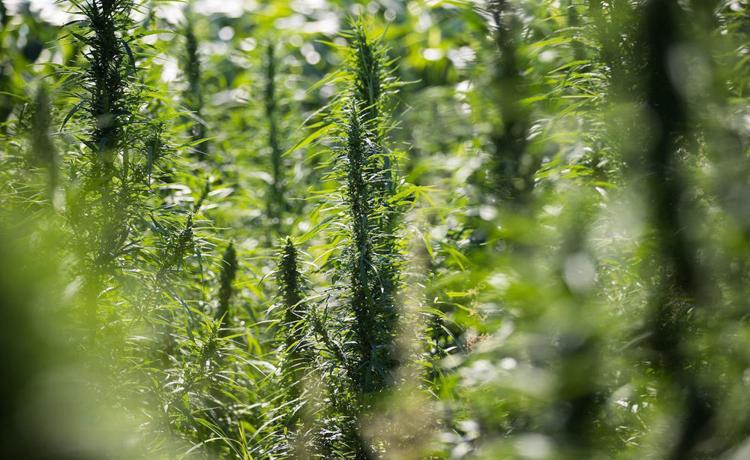 Hemp, as a food, fiber and oil crop, has a huge potential of bringing a positive economic benefit to Nebraska’s agricultural industry, according to two speakers who spoke Monday at the Nebraska Independent Crop Consultant Association’s meeting in Grand Island.

Speaking on Monday were Bill Achord of Lincoln, who is president of the Nebraska Hemp Association, and Andrew Bish of Giltner, who is the CEO of Hemp Harvest Works, a hemp equipment manufacturer.

Achord founded the Nebraska Hemp Association in 2014 in anticipation of hemp production for food, fiber and oil becoming legal in the U.S. That year, the USDA conducted a pilot study about hemp production. Now, the current Farm Bill has authorized hemp as an agricultural crop.

Recently, the USDA accepted rules and regulations for growing hemp in Nebraska. He said the Nebraska Department of Agriculture is now accepting applications from farmers, processors and brokers for hemp production in the state.

Achord said the hemp industry in Nebraska is still in the infancy stage as there is little infrastructure to support hemp production in the state. Infrastructure is defined as having places to process hemp and markets to sell it.

“That is an issue for farmers because they want to take a crop to market,” he said.

But Achord is optimistic that infrastructure will begin to appear quickly once demand becomes more prominent for the thousands of different products that can be made from hemp.

He said there are three types of hemp that can be grown. One would be for oil as CBD oil has been identified to be beneficial for many health-related problems. U.S. consumer sales of CBD could reach about $1.8 billion by 2022, compared to about $500 million in 2018.

A second use for hemp is for various food products that can be processed from the plant, whether it is the seed, meal from the seed or even using the seeds to make hemp milk. Hemp seeds are rich in healthy fats and essential fatty acids. They are also a great protein source and contain high amounts of vitamin E, phosphorus, potassium, sodium, magnesium, sulfur, calcium, iron and zinc, according to healthline.com.

A third use for hemp is its fiber that can be processed and manufactured into thousands of commercial and industrial products, including rope, textiles, clothing, shoes, food, paper, bioplastics, insulation and biofuel. Achord said Henry Ford was an early advocate for hemp as a biofuel.

He said plastics can be made from hemp fiber and they are biodegradable within three months.

Hemp is not a new crop. People have been growing it for more than 8,000 years as a valued source of fiber, especially as a textile fiber.

Hemp was introduced to North America in 1606 and was in strong demand for sailcloth and cordage. While much of hemp production was concentrated in Kentucky after the Civil War, it began to be grown in other states during World War I to aid in the war effort. Hemp production dried up in the U.S. after 1938 when the Marihuana Tax Act of 1937 became law.

As hemp-based food, fiber and health products have become more available to the public, much of the hemp is grown and imported to the U.S. As of September 2019, the U.S. had imported roughly $66.6 million worth of hemp that year, with the vast majority coming from Canada (accounting for approximately $59.3 million, or 89% of U.S. hemp imports). Hemp seeds by far represent the most often imported items, accounting for $47.72 million, or nearly 72% of U.S. hemp imports.

Achord said U.S. farmers are missing out on a potential billion-dollar industry in hemp production.
“There is a real learning curve for the crop because it is a different crop, but it is not that hard to grow,” he said. “You dry the grain like you would any grain.”

Like hay, hemp fiber can be cut. dried and baled in the field, Achord said.

“It is not all that difficult,” he said. “Your machinery is going to take more maintenance because the fiber is so strong.”

Achord said the crop for seed production cannot be stored very long because of its high oil content, which is a reason for the need for processors nearby where the crop is produced.

The other speaker was Andrew Bish. He started Hemp Harvest Works two years ago to help farmers better adapt to hemp production.

During his presentation, Bish spoke about agricultural methods and machinery used for growing and harvesting the various hemp crops for food, fiber and oil.

He also manufacturers hemp growing machinery at his business in Giltner.

“We definitely have some challenges in growing hemp in Nebraska for CBD,” Bish said. “That is mainly because of feral hemp or heirloom hemp. That is something that most states don’t have a big problem with, but Nebraska does.”

But when it comes to growing hemp for food and fiber production, he said Nebraska has the potential to be a powerhouse in hemp production.

Although nearly three-quarters of Nebraska crop land is dedicated to corn and soybeans, Bish said they are not sustaining the state’s farmers.

“Hemp is a viable alternative and we need to be exploring alternatives at this point,” he said. “This is a good plant that is good for the environment and good for communities.”

Hemp products can be recycled, reused and are 100% biodegradable. Proponents of hemp claim that it can help reduce global warming because it takes out large amounts of carbon dioxide per acre, more than most plants.
A potential big breakthrough for hemp is its use as livestock feed, Bish said.

“When we can feed this to the dogs, cats and cows and horses, we are really going to see hemp explode throughout the Midwest,” he said.

Ultimately, Bish said, the United States will need to get hemp fiber processing going first and then grain processing before hemp’s crop potential is realized.

“For Nebraska, we have a lot of opportunity but very little marketplace to go to right now,” he said.