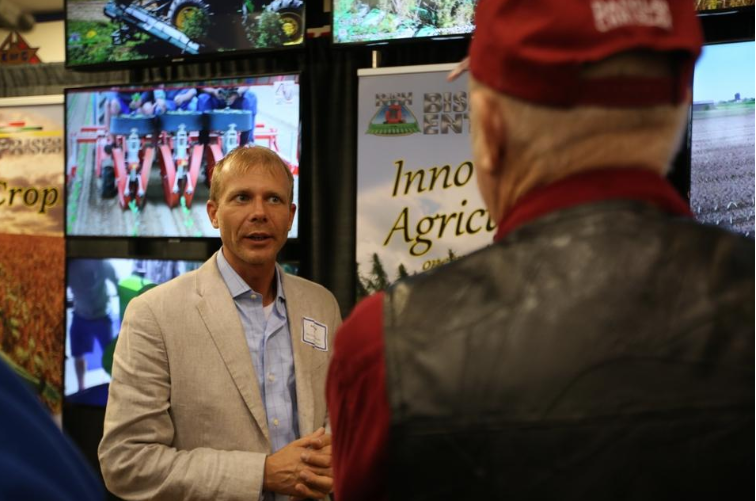 The Kansas farmers were joined on the rainy Saturday morning by counterparts from Missouri, Oklahoma, Colorado, and Nebraska, as well as CBD oil business owners, producers and more. The groups gathered for the first Kansas Hemp Symposium at Cottonwood Court at the Kansas State Fairgrounds.

“I think it went really well,” said PJ Sneed, member of the Planted Association of Kansas. “We had about 300 people attend, give or take a few.”

The Planted Association of Kansas and Kansans for Hemp helped organize the symposium in conjunction with the Hemp Biz Conference out of Colorado.

The event also served as a fundraiser for the Planted Association of Kansas, which has been working to become a designated trade organization, and began organizing the symposium five weeks ago, according to Vice President and Co-founder Kelly Rippel.

Rippel reached out to the Hemp Biz Conference and said Kansas producers needed answers and clarity on the issue of growing industrial hemp within the state. The symposium focused largely on the regulations and application process for the state’s pilot research program on industrial hemp.

State legislators created a research program within the state last year and tasked the Kansas Department of Agriculture with creating regulations. At the time, the production of commercial industrial hemp was not in line with federal law. However, in the 2018 Farm Bill, industrial hemp was declassified as a schedule 1 controlled substance.

This move means states can now produce industrial hemp and be operating within federal law.

Some of the more contentious regulations in the Kansas program require that producers must purchase certified seed, cannot keep their seed after harvest, and how the crop will be tested for THC levels.

Industrial hemp is defined as hemp that contains less than 0.3 percent THC. In Kansas, if a producer’s crop tests over the 0.3 percent, KDA will require that it be destroyed. Some symposium attendees wanted to know what equipment and kinds of tests the state would use, and especially if those tests would test for multiple types of THC or just the “delta nine.”

“That is a very good question, and one that you need to ask your state legislator,” Hemp Biz Conference CEO Christie Lunsford said. “They need to hear that from you, so it is clear how they’ll be testing.”

Speaker Rick Trojan walked attendees through the different varieties available in hemp plants, including varieties for harvesting seed oil, seeds themselves and fiber.

Seed oil can be used in food as well as health supplements such as CBD oil, which leads to a main contention with state-approved certified seed varieties. Only three seeds on the list boast a CBD level over 10 percent — ideal for harvesting the oil. Trojan also said that plants may test hot in the first year while they adapt to new environments — as there are no certified seed dealers in the state — but without being able to keep seeds, producers may run into that problem year after year until in-state seed salesman are established.

While growing for CBD was a popular option among attendees because of the increasing popularity of CBD oil, Lunsford said growing for fiber is a strong option.

“Right now we’re in a boon cycle with CBD, but that is going to flatline,” Lunsford said. “But the plant can still be bountiful for fiber and food industrial uses.”

Seeds and more can be used in creating food for human consumption, as well as in animal feed. The fiber can be used to create everything from clothing to the building blocks of a home.

“Kansas is also rich in limestone, which is an important component of Hempcrete,” Rippel said. “So we could become a leader in producing Hempcrete.”

The deadline to file paperwork to be part of the Kansas pilot program for industrial hemp is March 1.

“If you want to be involved, right now I would recommend you send in your application and move toward planting this year if that is right for your farm,” Lunsford said..