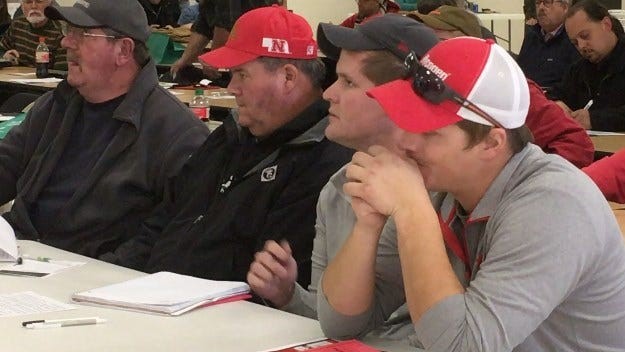 NEBRASKA CITY – Potential growers at the Midwest Hemp Forum in Syracuse Saturday were encouraged with the prospect that Nebraska may issue hemp licenses to all qualified applicants for 2020.

Andrew Bish, who founded Hemp Harvest Works after returning to the family farm near Giltner in 2012, was among the 176 applicants for the 2019 hemp season, but was not among the 10 producers chosen.

Bish: “I was very disappointed in the progress in Nebraska in terms of allowing farmers to grow in the 2019 growing season. I’m encouraged, however with my conversation with the (state) Department of Ag the other day because they are, in fact, enacting the bill that we put out there. They are going to let us grow hemp this year. They are working to make this happen.”

He said he expects more than 270 licenses to be issued, but state Agriculture Secretary Steve Wellman told the Omaha World-Herald in October that it too early to assume there will be “limitless” licenses.

The forum featured participants from Sidney, Iowa, to Sidney, Neb., as well as growers from Canada and Oregon  and hemp processors.

Forum representative Colin Fury said participants went out from the forum  with increased interest in learning more about hemp for fiber and hemp for flower production.

Hemp can be used in food, fiber, paper, beauty products and other products, and the industry estimates it could grow nationally to be a $1.9 billion market by 2022.

Bish agreed with forum speaker State Sen. Myron Dorn who talked about hemp’s potential as an economic driver for the state.

Bish: “This crop is not going to save every farm in Nebraska, but what it is going to do. It’s going to give farmers another option and that’s what they need.”

State officials say final decisions on the number of licenses will not be settled until after the state has submitted its plan to comply with the federal  rules for hemp cultivation and processing. The state has to submit its plan by Dec. 31, which will be followed by a public comment period.