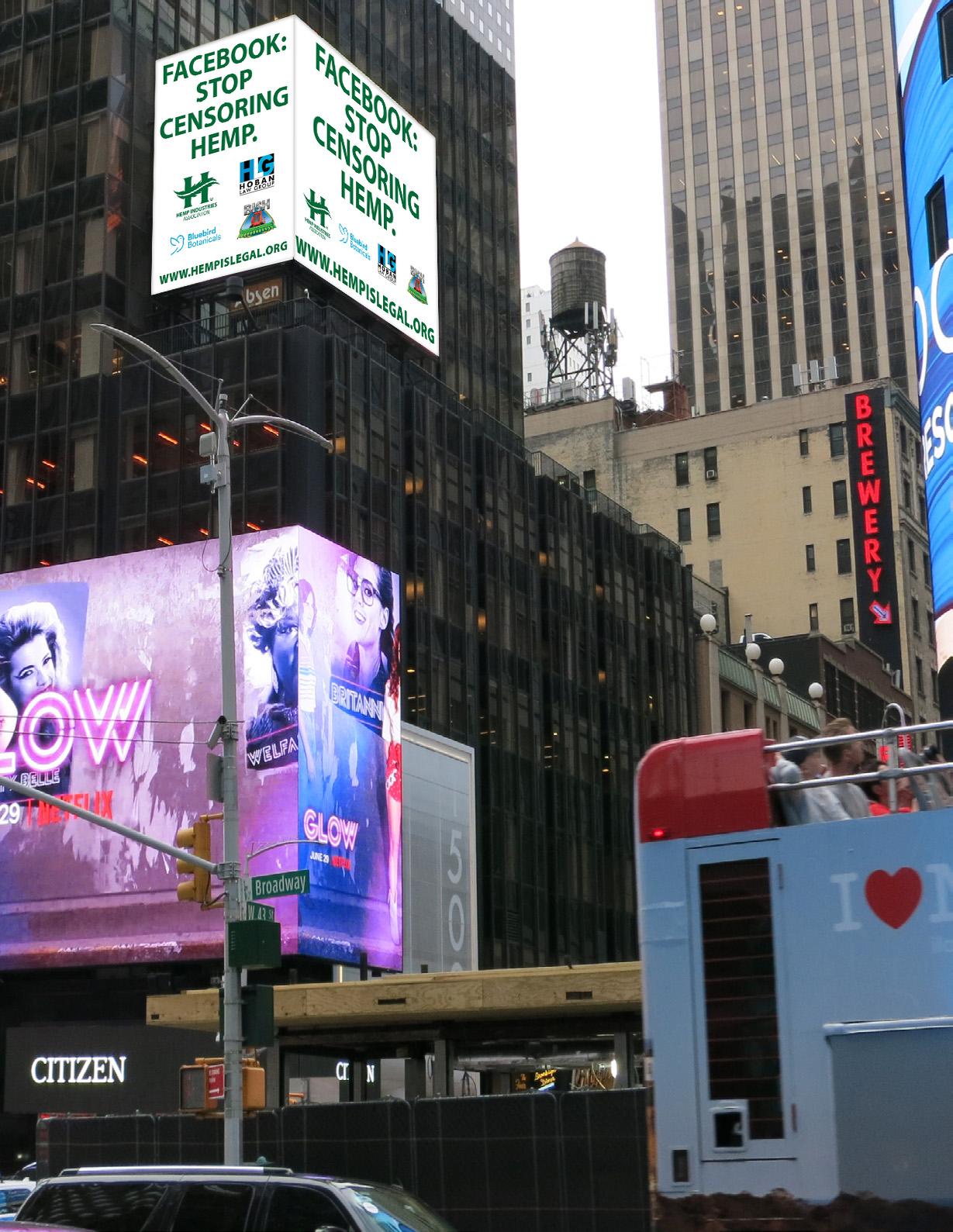 PHOENIX, May 23, 2019 /PRNewswire/ — Hemp Industries Association® (HIA®), in association with Hoban Law Group, Bluebird Botanicals, and Bish Enterprises, is launching a national campaign aimed at addressing Facebook’s current advertising policy of prohibiting the marketing and promotion of industrial hemp via Facebook and Instagram. Although hemp was redefined as an agricultural commodity, explicitly removing it from the purview of the Controlled Substances Act and the jurisdiction of the Drug Enforcement Administration with the passage of the 2018 Farm Bill, the current Facebook policy still classifies hemp as an illegal, prescription or recreational drug.

“With the passage of the farm bill, it seemed there would be a new dawn for stakeholders of the hemp industries absolving them from confusion over whether hemp is a federally controlled substance – it’s not,” said Colleen Keahey Lanier, Executive Director of the Hemp Industries Association. “But hemp entrepreneurs nationwide are currently being denied access to one of the most powerful marketing platforms in the world for small businesses restricted to outdated policies that continue to conflate hemp with marijuana. Not all of Cannabis is considered a drug, and Facebook’s new AI technology is already obsolete if it continues to recognize images of Cannabis as a controlled substance generally.”

Marketing limitations imposed by Facebook actually exceed what is required by law and have had a significant impact on hemp companies’ capacity to develop their digital presence. Facebook, with its 2.38 billion monthly users, represents a massive market for small businesses. For new entrepreneurs looking to break into the growing hemp industry, being denied access to the social media platform’s advertising capabilities represents a massive roadblock.

“Our goal is to change Facebook’s current policy by applying pressure in the most public way possible,” said Lanier. “They use a wide-reaching platform to communicate and so are we.”

The digital advertisement, which simply reads “Facebook: Stop Censoring Hemp” will run daily in Times Square until August 24. In addition, the Association is coordinating a massive grassroots campaign among its more than 1,500 members in support of the much-needed policy change.

“We are asking all hemp supporters — advocates, farmers, processors, manufacturers, retailers and consumers — to join the movement and help us turn Facebook green,” Lanier said. “Hemp advertisements are allowed in Times Square, so why not on Facebook? Hemp is completely legal under federal law.”

The Times Square declaration also promotes a call to action, urging viewers to visit the campaign’s official communication portal, HempIsLegal.org, to sign a petition of support.

For more information about the campaign, visit: www.HempIsLegal.org

About the Hemp Industries Association ®

Hemp Industries Association ® (HIA®) is a 501(c)(6), membership-based, non-profit organization that works to advance the hemp economy and educate the market for the benefit of members, the public, and the planet. Since its founding in 1994, The HIA has worked tirelessly for its 1,500-plus members to expand and protect the sale and marketing of hemp products. The culmination of that work was the passing of the 2018 Farm Bill, which officially redefined hemp as an agricultural commodity and removed it from the purview of the Controlled Substances Act, thereby paving the way for a massive expansion of the market and positioning hemp producers to be a global economic force.